What is Capacitive Pressure Transmitter?

We use a capacitive pressure transmitter is a device to measure pressure.

The electronic components present behind the pressure transmitter are capable of converting the applied force of the sample upon the pressure sensor into an electrical signal. 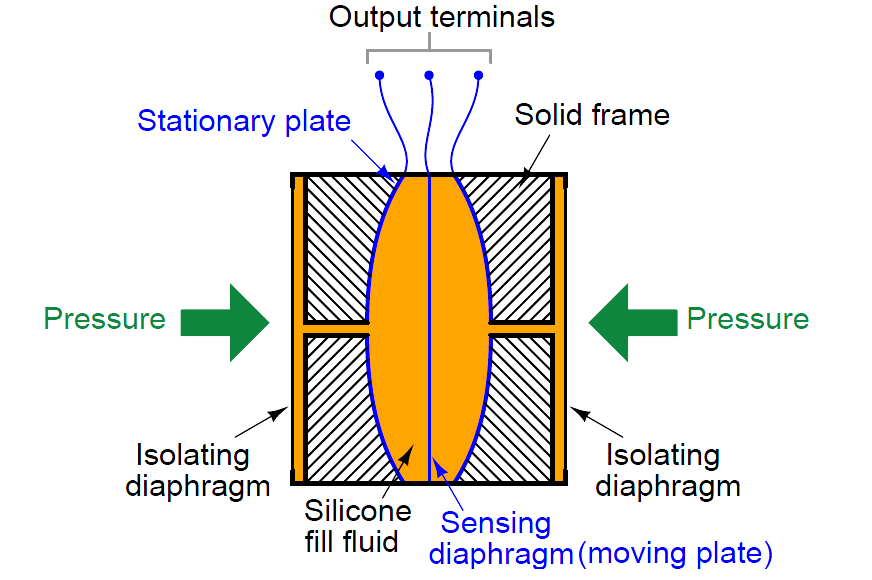 There are four main types of Capacitive pressure transmitter:

They sense absolute pressure and get referenced to a full vacuum. The stress of the measured media is compared with the reference pressure of an absolute vacuum in a sealed reference chamber.

The absolute measure transmitter measures the pressures that are not influenced by atmospheric forces. You use them when you need high accuracy of pressure like, low-pressure measurement of vacuum distillations column.

You can use them for both flow and level applications;

To measure the difference between pressures on the upstream and downstream side of the pipe’s constriction (to compute flowrate), which is the primary element.

First introduced in 1992, these transmitters are used to measure two or more process variables.

Besides pressure and temperature, it is possible to use the multivariable pressure transmitters to measure volumetric flow and use these values to compute mass.

Mostly you use them to measure steam and gas flow measurement.

What Does a Capacitive Pressure Sensor do?

A capacitive pressure sensor efficiently uses the capacitor’s physiognomies and its electrical field to form a sensor.

They detect any change in the electric field, and the sensor can register any touch or proximity, displacements, and the detection of humidity and fluids.

How Does Capacitive Pressure Sensor Works? 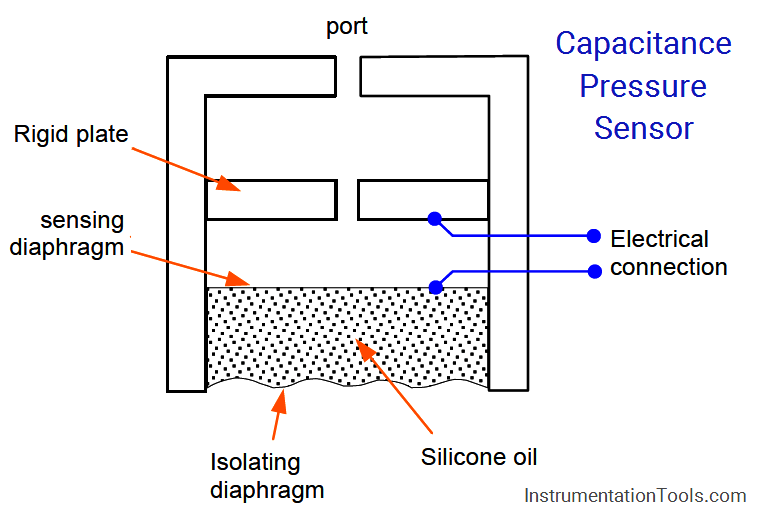 The Capacitive Pressure Sensor works according to a principle that, if a differential pressure deforms the sensing digraph between the two capacitor plates, an imbalance of capacitance will occur between itself and the two plates

The capacitance bridge circuit detects the imbalance and converts it to a D.C output current to 4 to 20 ma. The capacitive change is senses the movement of a flexible digraph relative to a fixed plate.

Moreover, another kind of capacitor uses concentric hollow metal cylinders just like flat-plate type, which is proportional to the area.

In case the two input pressures are the same the diagraph is positioned in the center leading to equal capacitances.

Use of Pressure Sensors

You can use pressure sensors in many devices, including automobile, medical, industrial, consumer and building. Any device that requires and depends on accurate and stable pressure measurements in order to operate reliably.

What is the difference between two input capacitances?

The displacement of the sensing digraph shows the difference between the two inputs of two capacitances. This difference of capacitances and equivalent pressure signal is measures using a bridge circuit.

Difference between Inductive and Capacitive Sensors:

How to Perform a Test?

The first thing you need to perform a test is;

Factors that affect the accuracy of Pressure Sensor:

Additionally, if the accuracy is stated as a percentage of reading, then;

Whatever the reading is among 0-200 psi is expected to be within the +2 psi of the true pressure.

The Pressure transducer is also a sensor with a voltage output directly proportional to a variation in pressure or other mediums. In comparison to transmitters, they have lower operating power and consumption.

Transducers are ideal to use in remote or OEM applications where the available power is a premium.

The only criteria to choose between pressure transducer or transmitter vary according to the needed output. The factors that determine selecting the right pressure instrument for an application are accuracy, range, working temperature, and the medium.

For output signal, you should take these points into account;

The capacitive sensors measure pressure by detecting changes in electrical capacitance caused by the movement of digraph. The general purpose of the transmitter is to transmit signals.

--- END ---
Prev: Pressure Transmitter for Gas: Handling and Usage
Next: What is the use of pressure HVAC pressure sensors? Beginner Guide